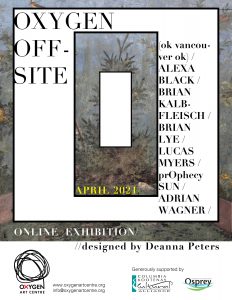 Off-Site looks outside, beyond the gallery walls. It seeks to create conceptual and procedural exchanges between artists working remotely during the pandemic. With a focus on process, this project is incited by the exchange of artistic “prompts” for another artist to interpret, creating a call and response between the artists and their works. By creating a circular exchange between the artists, this project endeavours to trace digital and creative connections during this time of physical isolation.

The website holds space to share and connect the artworks created over two-months across a variety of mediums, approaches, and practices. Off-Site is interested in moving beyond the institutional space of the art gallery and into site-specific or domestic spheres to explore the intersection of art and the everyday.

positioned somewhere between “art” and “craft” (ok vancouver ok) is interested in experimenting as self-taught musicians and artists. Working with textiles, film, found objects, performance, and writing, this project looks to explore the effect and extent technology has on work, art, and liberation. They \pose the questions: do machines, tools, and technology help or hinder the creative process? When does labour and work become art and vice versa? How is traditionally feminized labour and art undervalued? How are hegemonic structures replicated in outsider spaces and the domestic sphere?

Alexa Black is an artist of mixed Nahua, Pipil, Maya and settler heritage creating as a guest on traditional, ancestral and unceded territory of the Coast Salish peoples, including the Xwməθkwəyə̓ m (Musqueam), Skwxwú7mesh (Squamish), and Səílwətaʔ/Selilwitulh (Tsleil-Waututh) Nations.

Through self taught explorations in photography, drawing, painting and mixed media arts, Alexa found her passion deeply embedded in antiquated techniques of photography and classical illustration. Enamoured with tintype and wet plate collodion processes, she learned the foundations through a brief mentorship with Quinn Jacobsen.

Black seeks to reveal the magic of hidden realms that exist in parallel to our terrestrial and colonially defined reality. Her art is ignited by the energies of her indigenous ancestral territories, animism, and being an ally to marginalized populations. The work is built by reconnecting the seams of her fractured identities, by reclaiming and amplifying the voices of the silenced ancestors of her matrilineal blood lines. Black divines dreams and visions shrouded in haunting atmospheric aesthetics that are symbolic of life’s beauty and cosmic initiations. Her work is primarily dedicated to deconstructing the disconnected and damaged societal tissue imposed by colonial standards of living.

Alexa has been a featured artist in galleries across BC and internationally in Los Angeles. Her drawings, films, and paintings have been featured in published works such as Invisible City and Discorder Magazine. Recently she was awarded the Research and Creation Project Grant by the Canada Council of the Arts to produce her upcoming 78 piece innovative and intersectional tintype/mixed media collage oracle, based from a traditional tarot deck. This evolving body of work is to be featured in SEITIES analogue print publication this upcoming summer.

Brian Kalbfleisch is a visual artist and musician based in Nelson, BC.

A piano player, ukulele-ist, and singer, he draws on influences such as Miles Davis, Pink Floyd, Radiohead, Portishead, and Neil Young.

For this project, Kalbfleisch will capture the creation of a series of mosaics in stop time video accompanied by original musical compositions.

Kalbfleisch is also active as an independent events coordinator and curator of both the visual art and music. Among other things, he established the art gallery at Kaslo Jazz Festival in 2017 and developed the Blue Night Arts and Culture Crawl in Nelson. In 2018 he was given the Sustainability Leadership Award by the City of Nelson for his contributions to the Arts sector.

I am grateful to live and prosper on unceded traditional territory of the Ktunaxa, the Syilx, and the Sinixt peoples.

Brian Lye is a filmmaker and visual artist from Vancouver, Canada, now based in Nelson. His lens-based works are preoccupied with magic, humour, and the everyday. He holds a BA in Film Studies and Japanese Studies from the University of Victoria, a Diploma in Screen Production from Sydney Film School, was a guest student at The Film and TV School of the Academy of Performing Arts in Prague, and recently completed a Master of Fine Arts degree in visual art from The University of British Columbia.  His films and animations have won awards and screened internationally at venues such as Sundance Film Festival, Melbourne International Film Festival, The Contemporary Culture Centre of Barcelona, and LIVE! Vancouver’s performance art biennale. He has been an artist in residence with the Klondike Institute for Art and Culture and the Vancouver Board of Parks and Recreation.

Since graduating from the National Theatre School in 1998 Lucas has performed in many of the major theatres across Canada as well as touring internationally to the US, England, France, Switzerland, Mexico, Singapore, New Zealand and Brunei.  He has created and performed in many new plays as a member of the Victoria-based independent theatre company TheatreSKAM and studied physical theatre and collaborative creation with The SITI Company in New York and Boca del Lupo Theatre in Vancouver. In 2007 he returned to Nelson, BC to raise a family and form PilotcoPilot Theatre with a mandate to create work which is accessible, thought provoking, and highly theatrical in an effort to attract a new generation of theatregoers.  He also performs as a post-modern Vaudeville duo, The Amazing and Impermeable Cromoli Brothers, which won the Best Comedy Award at the New Zealand International Theater Festival.  In 2013 he was appointed as Nelson’s Cultural Ambassador in recognition for his achievements in Theatre Arts.

Dr. prOphecy sun is an interdisciplinary performance artist; queer, movement, video, and sound maker; mother; and current Jack and Doris Shadbolt Fellow at Simon Fraser University. Her practice celebrates both conscious and unconscious moments and the vulnerable spaces of the in-between in which art, performance, and life overlap. Her recent research has focused on ecofeminist perspectives, co-composing with voice, objects, surveillance technologies, and site-specific engagements along the Columbia Basin region and beyond.

sun hosts Tapes and Beyond on Kootenay Co-op Radio and is the Arts Editor for Ecocene: Cappadocia Journal of Environmental Humanities. She performs and exhibits regularly in local, national, and international settings, music festivals, conferences, and galleries and has authored several peer-reviewed articles, book chapters, and journal publications.

Adrian Wagner began exploring composition and improvisation on the piano at the age of 5. He grew up surrounded by both classical choral music and southern gospel jazz. Living in one of the most ethnically diverse areas of the US, he simultaneously sang in a choir and as pianist for a dominantly black gospel choir and jazz orchestra

At the age of 17, he moved to New York City to study classical composition, jazz piano, and improvisation. He later furthered his studies of jazz and audio production at the Berklee College of Music, in Boston, MA. In 1999, he travelled to Zimbabwe, where he spent 6 months writing a thesis on improvisation in traditional Shona music

This project seeks to explore the influence of the environment on performance. What is the inner creative dialogue that forms between artists and the space they inhabit. How far can this relationship be taken, so that the work itself is prominently influenced and given life to by the environment.

The medium of music and improvisation using battery powered electronic audio production and looping allows for the entire work to be created in the moment, existing as a reflection of the time and more importantly the space in which it was created.