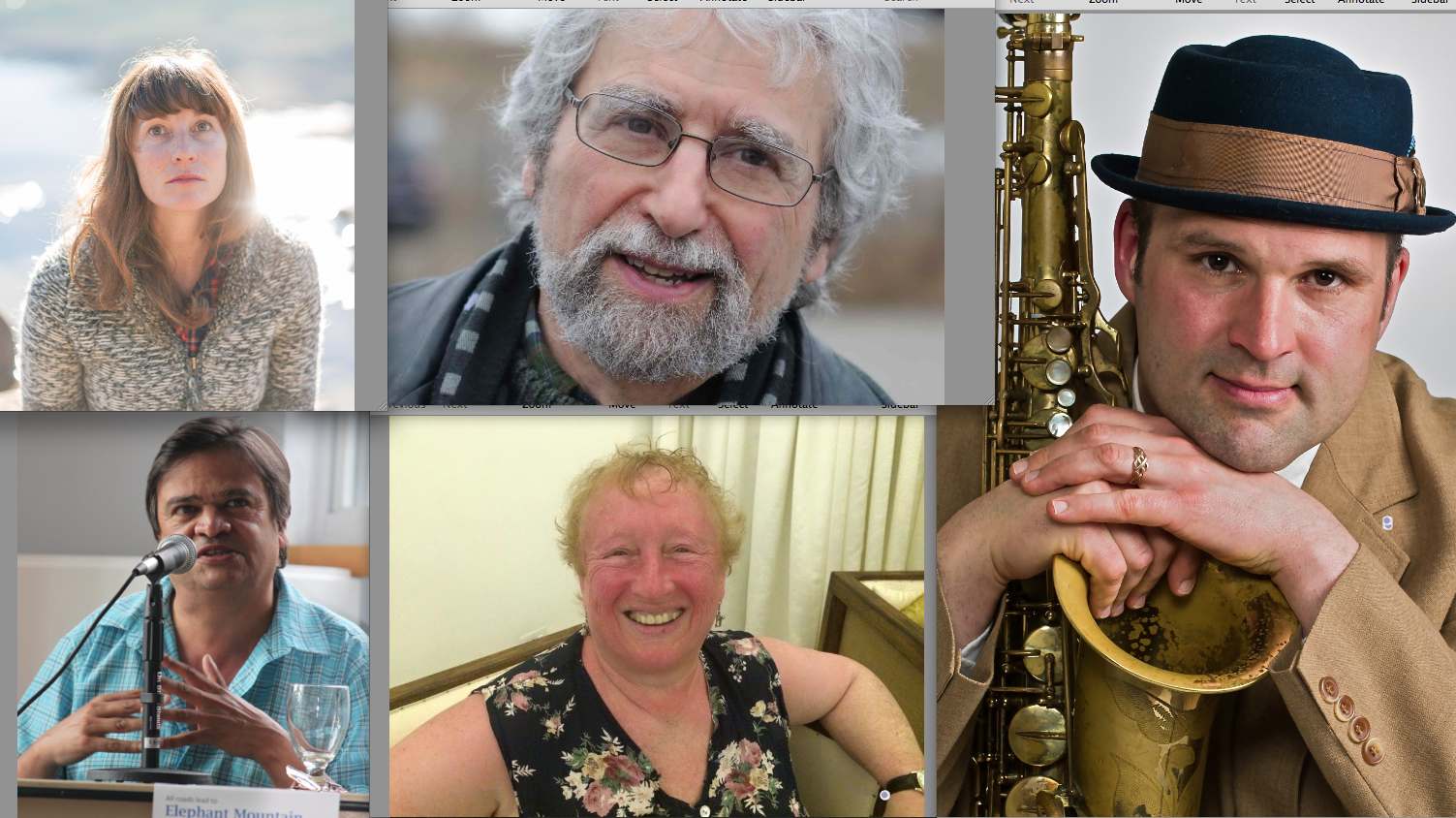 DETAILS:
APRIL 28 at 7:30 p.m – KITTY LEWIS
AN INSIDER’S LOOK AT CANADIAN LITERARY PUBLISHING—AND SOME TIPS ON HOW TO GET PUBLISHED—OFFERED BY KITTY LEWIS OF BRICK BOOKS APRIL 28 AT NELSON’S OXYGEN ART CENTRE

A chance to hear an insider’s look at how the Canadian literary publishing world functions, and so gain some tips about how to become part of that world, will be offered by Kitty Lewis of Brick Books at Nelson, B.C.’s Oxygen Art Centre on Friday, April 28.

Lewis’ talk begins at 7:30 p.m. Admission is free ($5 donation appreciated) and the event is open to the public. Oxygen is located at 320 Vernon St. (alley entrance).

General manager of Brick Books, one of Canada’s major poetry publishers, for more than 20 years, Lewis will describe how the publishing house began and how manuscripts are chosen for publication. As well, she will speak about as the financial side of publishing today, author tours, e-books, working with sales staff, podcasts, networking and more.
“‘The book is dead! Poetry is dead!’ I have been reading articles proclaiming this for years,” Lewis said. “But Brick Books has been publishing poetry books since 1975 and we are still going strong.
“We find new readers all the time and our books win awards. Digital or print, there is always room for poetry in our busy lives.”

Founded in London, Ontario by poets Stan Dragland and Don McKay, Brick is the only press in Canada specializing in publishing poetry, Lewis said.  In 2014, she was given an honorary membership in the League of Canadian Poets in recognition of outstanding service to the League and the poetry community. 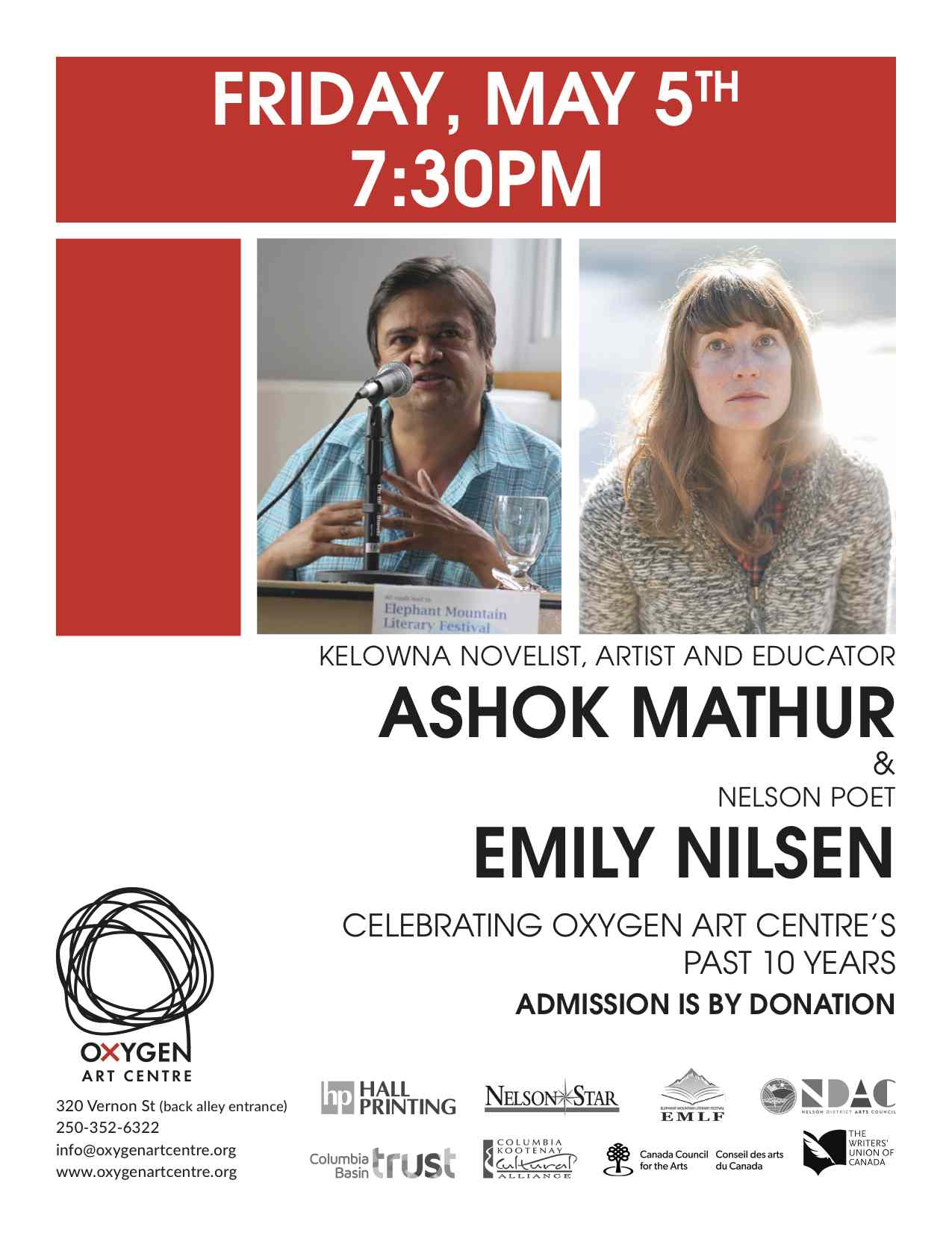 The fourth and final reading in the 2016-2017 series marking 10 years of programing at Nelson, B.C.’s Oxygen Art Centre will present Kelowna novelist, artist and educator Ashok Mathur and Nelson poet Emily Nilsen on Friday, May 5.

The duo’s reading begins at 7:30 p.m. Admission is free ($5 donation appreciated) and the event is open to the public. Oxygen is located at 320 Vernon St. (alley entrance).

Mathur’s most recent novel is A Little Distillery in Nowgong, published by Pulp Press in 2009. The book, according to the Vancouver Sun, “is gritty and realistic while embracing a graceful magic; it is emotionally resonant and very often hilarious. A Little Distillery is note-perfect.”

Mathur, who heads the creative studies department at the University of B.C.’s Okanagan campus, is also an artist and curator. The novel was the basis of an artistic installation in Vancouver, Ottawa and Kamloops.

Nilsen’s first book of poems, Otolith, was published this spring by Goose Lane Editions. Her publisher describes the poems as being born in B.C.’s coastal rainforest: “These poems are full of life and decay; they carry the odours of salmon rivers and forests of fir; salal growing in the fog-bound mountain slopes.”

Poems by Nilsen in 2015 were finalists for the CBC Poetry Prize, and long-listed for the UK National Poetry Prize.

Support for Oxygen’s celebratory reading series has come from the Canada Council for the Arts through the Writers’ Union of Canada, as well as from the Columbia Kootenay Cultural Alliance. The readings are co-sponsored by Nelson’s Elephant Mountain Literary Festival.

Oxygen, Nelson’s only artist-run centre, was founded in 2002 by artists formerly employed by the city’s Kootenay School of the Arts. 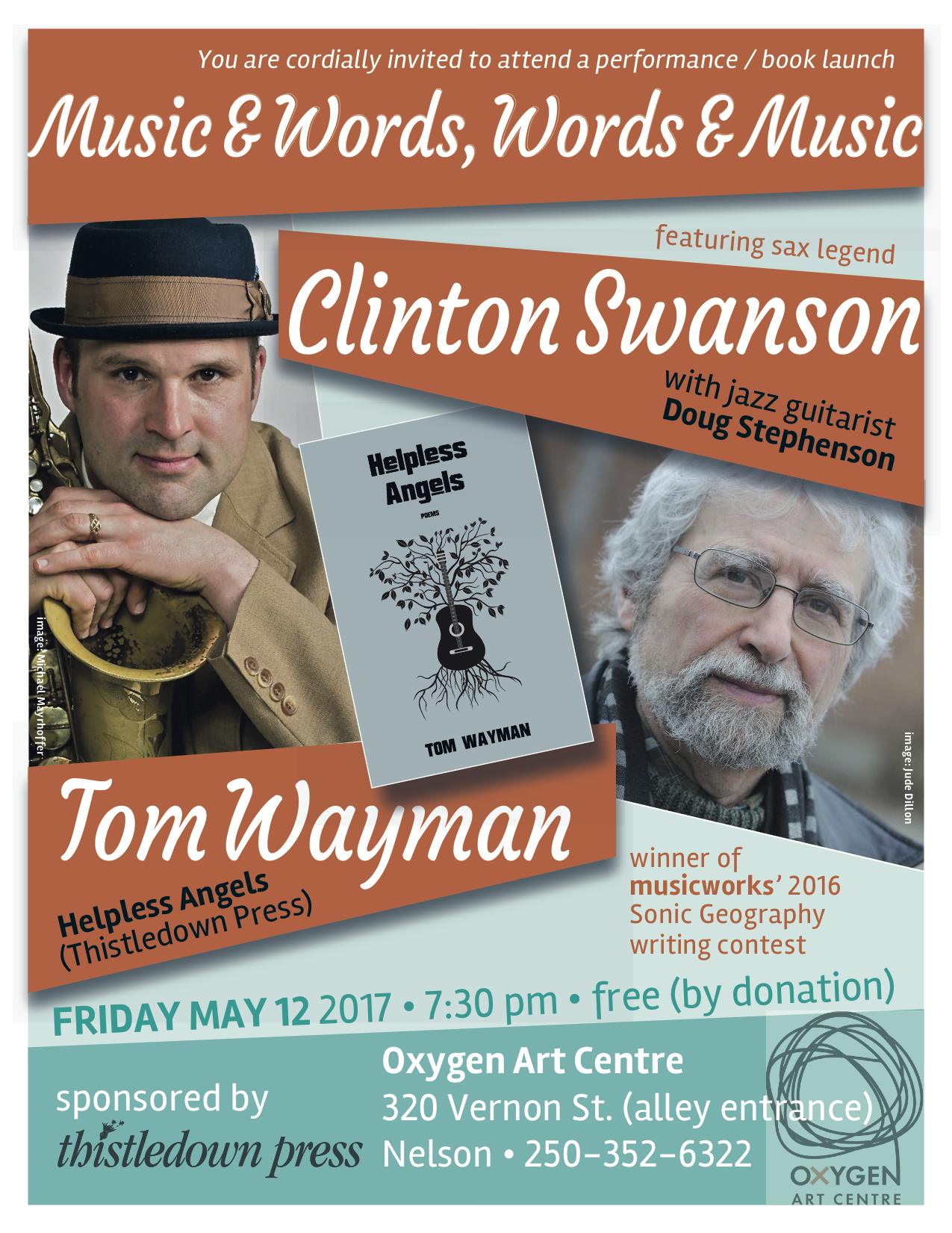 MUSIC AND POETRY’S LINKS CELEBRATED BY PERFORMANCE, BOOK LAUNCH AT NELSON’S OXYGEN ART CENTRE, FRIDAY, MAY 12
The longstanding links between music and poetry will be celebrated at a combined musical performance and book launch Friday, May 12 at Nelson, B.C.’s Oxygen Art Centre. Featured will be jazz duo Clinton Swanson and Doug Stephenson and author Tom Wayman.

The event begins at 7:30 p.m. and admission is free ($5 donation appreciated). Oxygen is located at 320 Vernon St. (alley entrance).

“Poetry began as song lyrics, or recited to musical accompaniment,” said Wayman, who will be launching his newest collection, Helpless Angels, the poems of which all relate to music. “As literacy spread through society, poetry began to be written for the page, too. But the two art forms have remained linked, most recently illustrated by the awarding of the 2016 Nobel Prize for Literature to singer-songwriter Bob Dylan.”

Performing at the Oxygen event will be Clinton + 1, consisting of local saxophone legend Clinton Swanson together with jazz guitarist Doug Stephenson. Swanson has performed locally, nationally and internationally for nearly 30 years in multiple ensembles, presenting his original compositions and arrangements. Stephenson is a long-time guitarist, bassist, songwriter and producer who moved to Nelson in 2012. He has worked with such musical stars as “Big” Miller, Tommy Banks and P.J. Perry.

“Clinton + 1,” Swanson said, “is a jazz duo that performs standards and originals with an emphasis on melody and creative improvisation.”

Wayman, a Slocan Valley resident since 1989, said his recent book of poems was conceived when he realized that his generation was the first in human history to be able to listen to any music they choose anywhere they go. “Poems in Helpless Angels reflect on how this development has impacted us throughout our lives. Other poems in the collection honor musicians who have been important to me, respond to the music found in nature, or consider the ways music enhances or alters our moods,” he said.

One poem in Helpless Angels was named in February the winner of Musicworks magazine’s “sonic geography” literary contest. Wayman’s 2012 poetry collection Dirty Snow won the Acorn-Plantos Award, and his 2015 collection of short stories about the Slocan Valley, The Shadows We Mistake for Love, won the Diamond Foundation Prize for Fiction (Western Canada Jewish Book Awards). Author of more than 20 poetry collections, as well as various books of fiction and nonfiction, Wayman in 2015 was declared a Vancouver Literary Landmark with a plaque on the city’s Commercial Drive commemorating his contribution to Vancouver’s literary heritage.

The Oxygen event is the first of a tour will see Helpless Angels launched during May and June in the company of various musicians in Vernon, Vancouver, Regina, Saskatoon and Edmonton. The collection is published by Saskatoon’s Thistledown Press, who are co-sponsoring the Nelson event.