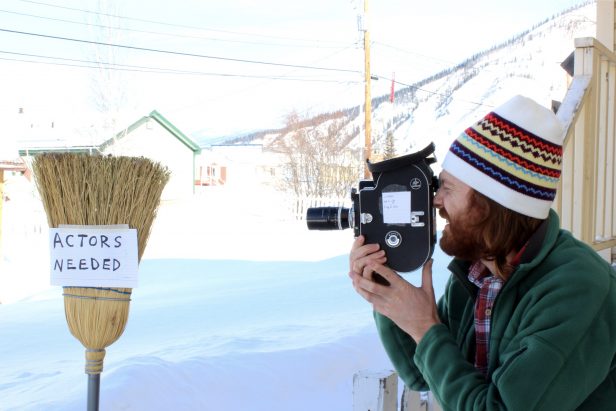 Join filmmaker Brian Lye at Oxygen Art Centre on Friday April 12th at 7pm for a public talk titled Deadpan Moving Screen Trick which will explore his adventurous forages into analogue filmmaking and processing, and his interests in early cinema, special effects, psychogeography, jokes and the everyday.

Following this public presentation Brian will teach a weekend masterclass called Film Play:  Shooting and Processing 16mm Film, which will run Saturday April 13 12-5pm, and Sunday April 14th 10-3pm. The masterclass teaches hands-on shooting and processing of 16mm film along with a film historical look at early cinema’s trick films, particularly the films of Georges Melies and the Lumiere Brothers from the late 1800s and early 1900s.

Participants will shoot on a Bolex camera and process their film with Caffenol-C, a process using instant coffee, vitamin c, and washing soda. Brian Lye says: “Shooting and hand-processing film is literally a hands-on experience.  We will load the film, wind the camera, mix our developer and process our film, all with our hands!  It is a way to get tactile with moving image production.” This two-day workshop will be a practical, fun, and low-fi introduction to shooting and processing film. It is appropriate for youth and adults with varying experience in analogue film production. No previous training is necessary. Play and experimentation with the medium will be encouraged.

The practical side of the workshop will cover the following:

By the end of the weekend all participants will shoot their own 1-minute film, which they have processed by hand. Lye, having taught this process before, says “I’m excited to teach the masterclass because shooting motion-picture film on a Bolex is a rare and magical experience. At the end of the weekend, we will screen what we have made.” A group screening of the new films will be held on the Sunday evening, April 14th at 7pm at Oxygen Art Centre. This masterclass is supported by the Columbia Kootenay Cultural Alliance, with In-kind Bolex rentals from Cineworks, Vancouver.

Brian Lye is a filmmaker and artist who recently moved to Nelson from Vancouver.  He enjoys collaboration, analogue film production, bricolage, and jokes.  His research interests include early cinema, special effects, play, human/nature, cognitive development, psychogeography, and the everyday. Brian’s films have screened in festivals, galleries, and television networks such as Sundance Film Festival, Melbourne Film Festival, Canal+, SBS Television Australia, Images Festival Toronto, Vancouver International Film Festival, The Museum of Sydney, Centre of Contemporary Culture Barcelona, and others. He holds an MFA from the University of British Columbia (2018), a BA from the University of Victoria in Film Studies and Japanese Studies, a Diploma of Screen from Sydney Film School (2008), and was a guest student at the Film and TV School of the Academy of Performing Arts in Prague (2010). 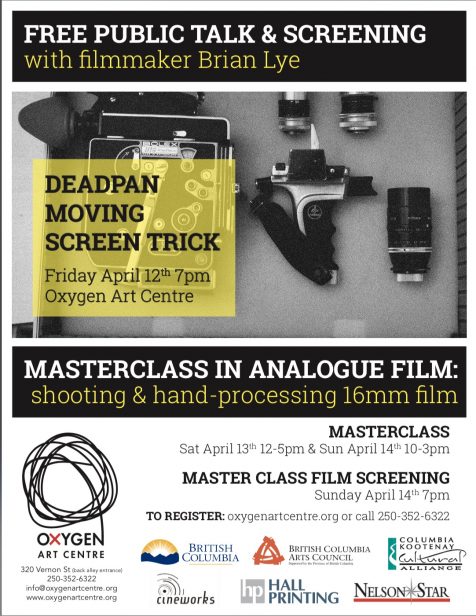